Hit enter to search or ESC to close

The Church of St Rocco

St Roch or Rocco, invoked against plague and other communicable diseases according to legend banished plague from Sutivan and in the process fell and hurt his knee which continues to bleed on the lovely wooden statue which is moved to the Parish church in the August 16th procession, only to be brought back to its original church on the hill of the same name. His loyal dog that helped him in sickness and asceticism is right beside him, and is nowadays celebrated as patron saint of dogs. Beautiful and ornate golden jewelry that Rocco is wearing in the procession is part of a great Sutivan art treasury that is partly kept in the parish office near the Church of the Assumption of the Blessed Virgin Mary and another part in the church museum. The church tower provides a unique panoramic view of Sutivan – town with two bell towers. It was renovated after a lightning strike and the old cross is on display in the church’s bounding wall. Below the church there is an old closed cemetery with a beautiful view of Sutivan and the Brač channel. The church keeps a number of artwork by Sutivan artists as well as votive offerings by the seafaring families with ship models being most notable. Among those models there is the oldest votive offering model of the Croatian Adriatic churches, made and offered in 1819. There is a newly built morgue next to the church, and services are held at funerals and on the day of St Rocco in the early hours of the morning. 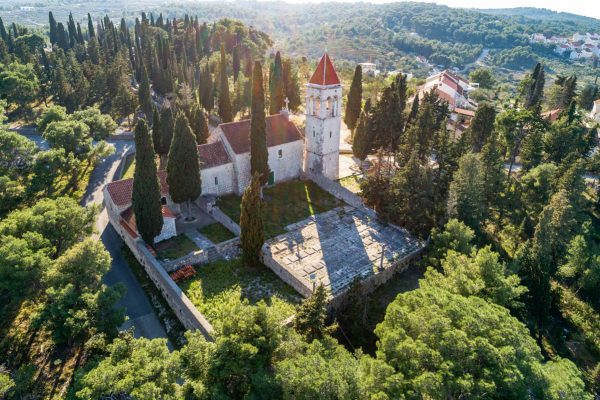